Let me preface this by saying, my main WoW character is named Svengaly. I am on Kul Tiras US. Kimilyn was my guildie. She was my friend.

So this happened yesterday and it really upset me 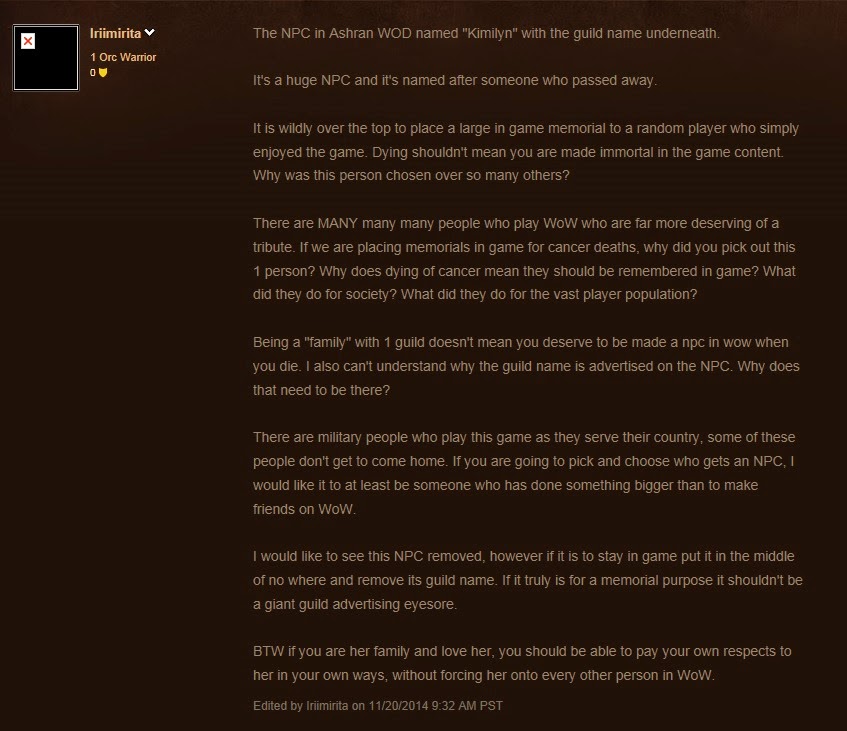 The forum thread upset me.  Rightly so, I feel.  What upset me more were the other people defending the troll, “he has a point”.

I know that he DOESN’T HAVE A POINT.  I KNOW THE WHOLE STORY. But I also realized that simply reading the NPC background history on WoWpedia might lead someone to believe that Kimi was a girl with cancer.  She died.  Why is she important?

I’m here to set the record straight and give a bit of history that hasn’t been published.

Kimilyn was an extremely active PvPer.  She has the Bloodthirsty title and has WELL over 250,000 honor kills (she reached that achievement 10/02/2012). She only recently became active in RBG’s and Arenas, after much pushing and prodding from those of us that knew how amazing she was.  Kimi played a priest.  She could often be found healing, many times outhealing ME, in battlegrounds. When we were healing TOGETHER, I felt invincible.  She also was one of the most skilled shadow priests I’ve ever encountered in PvP.  If she was shadow, and I was healing, I could count on her to peel for me.  She loved Arathi Basin and Warsong Gulch and could be often found defending Halaa between queues. Her favorite pet was the Singing Sunflower. She was from New Zealand and was part of the guild “late night crew”. Many people called her Kiwi Kimi.

Those are all things that I knew about Kimi.  What I didn’t know was that she was silently suffering from terminal brain cancer.  In fact, 99.99% of our guild had no idea.  Kimi told a SINGLE person (in a guild of well over 1500 players) about her condition.  On a very basic level, the reason she even chose to tell ONE person, was so that when she did pass, there was a point of contact to let her guild family know what had happened, and that she didn’t just disappear and leave us. It was an overwhelming shock to our entire guild and was definitely a gut check against my own mortality to learn that someone that was so full of life had passed.

None of this is groundbreaking in and of itself, but when you dig a little bit under the surface, the story is truly extraordinary.  She didn’t tell more people she was sick for many reasons, and I will explore a few of those here.  First off, she didn’t want people to feel sorry for her.  She was wise beyond her 26 years, in understanding that people will often surround you with pity.  She wanted her guild family to go into battle with her because they wanted to, not because they felt obligated to.  Secondly, she was not into drama or attention whoring.  She was respected, deeply, in our guild for her playing ability.  She wanted her skill and her love of the game to be her legacy.

Still, none of this explains why it is relevant that Blizzard make a fully functional, actively fighting, NPC for this individual. She didn’t actively stream.  She didn’t have 40,000 followers.  Her name isn’t all over Youtube, Twitch or Twitter.  Some people feel that well known people with a following are the only ones entitled to have a legacy in the game.  If you are basing your contributions to the community solely on your followers, subs or views, and NOT on the content of your character, you are doing it wrong.

But my story isn’t over yet.  Kimi was devoted to PvP.  She played this game that she loved, quite literally, until she drew her final breaths. Even though her body was failing her in the physical world, she knew that when she logged into Azeroth, she could be a hero.  She could escape her reality, knowing that her own death was imminent, and heal others in a virtual space. She never burdened anyone with her problems, her pain, or her fears. She rode into battle with a smile on her face and love of the Horde and all things WoW in her heart. She was a true Warrior, in both the physical and the virtual worlds, until the day she died.

Even though she wasn’t well known in the online streaming community, she was more devoted and a better role model of what a World of Warcraft player should be than 99% of the people that represent the community, publically. She was always available to take new players into Battlegrounds and was always encouraging people to grow and improve as players. She was humble, and even shy at times. I’d rather have her represented as an NPC, than a well known Twitch streamer who has an arrogant attitude and bad manners.

I’ve never spoken of this before, so it is extremely emotional for me to write.  Many people wondered why I was so heartbroken to learn of her passing.  We shared a guild tag, for sure, and I spent well over 4 months in battlegrounds with her nightly. But still, why so sad?

Earlier this year, I was in a Twin Peaks with Kimi where I was a fairly undergeared holy priest and was being farmed mercilessly by the Alliance. Spirit form was pretty much all I was in, the entire time.  At that time I had no idea of her terminal condition.  I sent her a whisper, of course complaining.  Our conversation went something like this:

Svengaly: UGH, they are farming my ass.  I’m spending more time in fail-angel form than anything else. This sucks

Kimilyn: You are doing great.

Kimilyn: Look at all the heals you are still doing though. Even in death you can help your team.

EVEN IN DEATH, YOU CAN HELP YOUR TEAM

(and this is where I burst into tears writing this.  This is why I’ve been so emotional ever since I found out she passed, and why her NPC in Ashran is so so so important.  Her supportive words stuck with me for months. When I learned she had died, they resonated so much more)

And that, my friends, is why her having an NPC is amazing.  She rises.  EVEN IN DEATH, she helps the Horde.  That is our Kimilyn.  She is still helping us.  Even in death.

Her call in Ashran: My body has fallen, but my spirit rises. I will always be with you

So please, pardon me as I wipe away my tears and return to my rage at the forum poster who states that she was not worthy of having an NPC dedicated to her.  It isn’t a recruitment tool for our guild, or an EYESORE as you so eloquently put it.  We have 1000’s of players in our guild and aren’t looking to fill ranks with those who want the same guild tag as an NPC. This isn’t something “fun” or something that gives us “bragging rights”. The fact that Blizzard heard her story and honored her was incredibly humbling for those of us in Forged in Flame.

Kimilyn and her legacy are more than her “having friends in 1 guild”.  She was an amazing, dedicated PvPer. She stood for honor, and bravery and her fight with cancer was more courageous than anything I’ve ever experienced in my life. She fought alone, to spare people she loved, in game, from suffering through the pain too. I can only hope to be as brave, in my final moments on this Earth, as Kimilyn was. Kimi would have wanted nothing more from you, than to storm the battlefield with her and claim victory.  Now she gets to do that for eternity. I’m glad I have a captain in Ashran that has that kind of fight in her.  Even if you didn’t know her, if you are Horde, she has your back too. I’m betting she would have even healed those of you that think she doesn’t deserve to have an NPC.  Put your jealous comments aside.

EDITED TO ADD: Forged in Flame NEVER asked for a memorial to be made to Kimilyn.  There was no petition or request or forum post made to Blizzard.  Through social media, and our overwhelming grief, Blizzard caught wind of the situation and THEY took action.  We were surprised to find her as a NPC during data mining during Beta. Prior to the data mine, we had no idea, nor was there “begging” for this to happen.  Please get your facts straight.

Some final thoughts on “family”.  In that horrid forum thread, there was mention of a guild not being “family”, or that on Twitter, we throw the word family around a lot and that we must not truly know what that means.  Let me elaborate a bit:

When Kimilyn passed, the guild was devastated.  Halaa was one of her favorite places in the game, and because of that Forged members set up a vigil in Halaa for over a MONTH.  For a month straight, guild members voluntarily posted themselves in Halaa to defend it from Alliance.  When Alliance brought too many, and were overtaking Halaa, the call went out in gchat and via Twitter that assistance was needed.  And assistance came. EVERY TIME.  It gave us a chance to mourn and honor our fallen.  That what family is.  That’s what we do.

Another example of family:

This year, many of the Forged members were able to attend Blizzcon.  Some of us wanted desperately to attend, but were unable to.  In true “no man left behind”, those in attendance made signs with our names on it, and took us to the opening ceremonies too.  Not because of any reason other than “man we wish you were here with us, it’s so cool”.

This year I participated in Extra Life, for the 4th time.  I have a lot of people in this world that I share a region of my genome with. Real life family members. I quickly learned this year that DNA is NOT what makes a family.  I raised $720 to donate to charity during my Extra Life marathon.  Not a SINGLE PENNY of that came from REAL DNA SHARING family members.  My guild and Twitter family raised the donations.  A couple of other hosted me on a podcast to get the word out. My guild family took turns logging in to keep me awake, in game, for 24 hours. 2 guildies streamed and stayed up with me for the ENTIRE 24 hour time.  If that’s not family, I don’t know what is.

Currently, there are plans in the works to have a fundraising event for cancer research, to honor Kimi.  Forged members are putting the details together and I will post again when we have some details nailed down.