The posts in this series are to serve as a overall starting point for new players beginning their PvP journey in Battlegrounds in World of Warcraft. Most players will be in PuGs (Pick Up Groups), or with one or 2 friends. These are by no means intended as “expert” commentary for Rated Battleground strategies.

Eye of the Storm 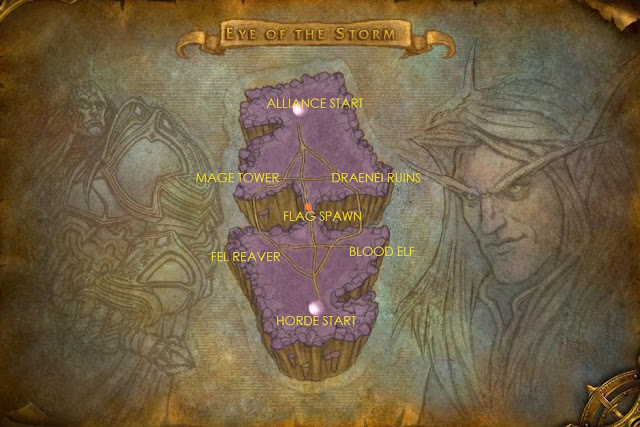 This is a 4 point “domination” integrated with a capture the flag map designed for 15 player teams.

You will zone into your own faction’s starting area, under a giant pinkish purple bubble.  Please buff your team and provide food if you have it!  You can mount, but cannot leave the bubble until the match begins. When the gates open, your teammates will spread out and run to one of the 4 nodes and possibly go to midfield. A clickable flag will spawn at midfield.  Other “bases” are taken by your team based on the number of people present. No clicking is need to “take” a base in normal battleground mode.  Points are awarded for the amount of time each base is held. The more bases your team holds, the faster you gain points.  Points are also awarded by capturing the flag. Flag captures are worth 75 points and can only be captured at a base that your team owns. The goal is to be the first team to reach 1600 points.

Typically in this battleground, the horde team takes the Blood Elf Tower and Fel Reaver Ruins at the start. Alliance teams takes Mage Tower and Draenei Ruins. Other team members may run to midfield which is where the flag will spawn.  Most groups will want to capture and hold 3 bases and not deal with running the flag.  If you team decides they want to win by running the flag, they will need to hold a minimum of 2 bases, while also running the flag. Numerically, a team has a VERY HARD TIME winning by holding one base, no matter how many times they are able to capture the flag.

EOTS– Eye of the Storm

Push– move as a group to the location indicated

Cap/Don’t Cap-Your team is carrying the flag and your teammates either want to Flag Carrier to run over the capture point, or hold off and wait

Peel off– Pulling an enemy off of a teammate. Usually you are asked to “peel off” of your healers.

Ninja– a stealthed character taking a node before anyone sees

Zerg– the entire team is moving together as one big group

What should I be doing?

Before the match begins, decide what role you would like to do and switch into the correct spec and gear. This map doesn’t utilize tank specs very well. If you are deadset on playing as a tank, you will not be doing much damage, but your excessive amount of stuns can be useful to control enemy healers. Healers are needed to keep team mates alive. Strong damage dealers are needed to kill the enemy. Decide what you want to do. Once the match begins, you CANNOT CHANGE YOUR ROLE. If you are using addons that show the roles of your teammates, this may help you decide what you are needed as. Usually, healers are in high demand.

DRUIDS, SHAMAN and MAGES/ Flag Carriers: Druids, shaman and mages make good flag carriers because of their ability to run fast!  If your team has decided to go after the flag and you are one of these classes, you can try to pick it up! Use Vortexs, Totems, Frost Nova, etc to slow enemies chasing you. If you are carrying the flag, you have to “cap” it at a base that your team holds. You “cap” the flag by running over a small platform at the top of the base.

HEALER: As a healer, stay back and heal. No seriously. That’s your job here. This is all out war and you need to keep your team alive so they can kill the others. This isn’t raiding or dungeons my friend! Throw mana conservation out the window. Burn through fast expensive heals and use your group heals. Use mana regen talents on cooldown and drink at every break in the action.

DAMAGE: KILL KILL KILL! Then KILL some more! Powerful bursting insta-casts are perfect for PvP situations.  Typically, there isn’t a need to try to kill the enemy flag carrier.  They will capture the flag and it will respawn in the center.  If a team is holding a flag for a REALLY long time, sometimes your teammates will call out to attack the flag carrier so you can force a flag respawn in mid.

Because the “3 base” strategy is used so often, you will have to communicate with your team as to which base is least heavily guarded and move as a group to new locations.  In a perfect world, your 15 man team would split into 3 groups and stay at each of the 3 bases you claim. That rarely happens, and often teams end up trading bases over and over and over throughout a match.

What should I NOT be doing?

If you are trying to capture a base and are stealthed, you will make zero progress!!  You have to be visible to enemies in order to start the capture bar moving toward your side.

If you are carrying the flag, you are not allowed to mount or you will drop the flag.

Don’t be one of 7 people standing at the flag spawn point trying to be the flag carrier. If you team is calling for help elsewhere and mid is under control, please go help!

Do not fight on the roads. If you get knocked off your mount and someone is trying to engage you on the road, keep running toward the node you were going to. Always be in a location where you can see the sliding bar that indicates who “owns” the base.  If you can’t see the bar, you are too dar away from the base and not being counted as “holding” it.

Stay at the node you capture unless your team calls for help.  Undefended bases are ripe for being picked off by the enemy team. If you are the only one there, STAY PUT and call out incomings to your team.  For example:  Type /i INC MT, 4  (that says in “instance” chat, 4 are incoming to mage tower)

AFKing. Please do not queue for BG’s and then walk away from your desk for 10 minutes when it starts. You will be reported AFK, removed from the BG and given a deserter debuff. It’s crappy to make your team be at a disadvantage because you want free honor. Even if you are undergeared, being behind the keyboard and TRYING to do something is better than nothing. No one will care if you are at the bottom of leaderboard numbers.

Padding the meters. We all like to see our names at the top of the leaderboard, but if all you are doing is standing at the fight on the road and doing burst damage, you aren’t helping your team. Play the objective.

So.. people are saying our flag carrier shouldn’t cap the flag.  Why not?

If your team is holding the flag and you lose control of the midfield spawn point, it is to your advantage to NOT cap the flag.  You don’t want to let it respawn and have the opposing team be in position to pick it up and run it to their base.

Well, what if I’m the flag carrier and the other team is trying to kill me?  Should I just die holding the flag?

NO.  If you are being attacked by the opposing team, it is better to capture the flag and score your 75 points, than to die.  If you die, they can pick it up and run it to one of their bases, score, and still be in midfield position to get the flag when it spawns.  If you are carrying the flag, be in position to score if things start to get ugly.

I get it. We all started somewhere. If you are in leveling battlegrounds, most other people won’t have gear either. Don’t panic.

If you are a fresh max level character, looking to get into PvP for the first time, please invest in the crafted PvP gear. You will still feel like you are wearing wet newspaper instead of chainmail, but at least it is something. With the new PVP Power stat, you really want to have PvP gear and not just your raid items. The good news is that honor accrues quickly and that soon you will be rocking high item level epics and not be as squishy. Remember, Honor caps at 4000! Be sure to spend it! Pandaria Honor Quartermasters are located along “The Wall”.

Did you know that DBM is for more than just raids and dungeons? There is an entire PvP section that provides timers for all the battlegrounds. This is essential in this battleground! There will be timer bars for each assault of a node, time till capture, and will update you as to which team is likely to win and in how much time. Very helpful!

Seriously. Click the link and install Battleground Targets. It allows you to see all of the enemy players names. You can even click on their name to target them. It also shows helpful information like who is carrying the flag, and the role of everyone in the battleground (healer, damage, tank). This is valuable because often times you have someone on your team saying things like “kill that druid healer”. I always found myself lost trying to figure which person in the madness/mob was the “druid healer”. With this addon, the names are all right there!

Once it is installed (I install through the Curse Client), log into Wow. Type /bgt in your chat box and it will pull up the configuration screen. Many options are already turned on for you, but be sure to select “Health Bar”. You will thank me later!

At the very beginning when you leave your bubble, your starting area is elevated and you will take significant fall damage.  Jumping off/backwards to the right and then running down will reduce this.  If you are a mage, slowfall your teammates so they can just jump straight off the front of the ledge.  If you are an engineer, use your Goblin Glider!

I’m an evil biotch and love using knockback spells like Typhoon to blow enemies off of the flag spawn point at midfield. (or priests can use Dominate Mind to walk them off the cliff) As they fall to their death below I wave!

You can fall off the map in EOTS and die.  Be careful.

If you find there is a base that is unattended and you are trying to take it over, you can stand anywhere around it to start the process.  Go inside buildings and stand behind buildings out of the line of sight. Just make sure you can see the “slider” that indicates ownership of the base.  You may be able to ninja a base with no one seeing you.

Don’t listen to losers that say “just stop trying, we are going to lose anyway.” There are acheivements from coming back from the brink of defeat. It can happen. Regroup and keep trying.

Keep communicating. Telling your team what is happening at all the nodes is important. So is fast reaction. If someone says they need help, and you are not actively engaged in a fight, GO.

You are going to die. A LOT. It happens. When you get better gear, you are going to live longer, do more damage/healing, and enjoy PvP a lot more. Keep working at it!